Simmons First National Co. (NASDAQ:SFNC – Get Rating) declared a quarterly dividend on Monday, January 23rd, Zacks reports. Stockholders of record on Wednesday, March 15th will be given a dividend of 0.20 per share by the bank on Monday, April 3rd. This represents a $0.80 dividend on an annualized basis and a dividend yield of 3.83%. The ex-dividend date is Tuesday, March 14th. This is an increase from Simmons First National’s previous quarterly dividend of $0.19.

Separately, StockNews.com lowered shares of Simmons First National from a “hold” rating to a “sell” rating in a research report on Monday.

In other Simmons First National news, Director Dean O. Bass sold 27,100 shares of Simmons First National stock in a transaction dated Thursday, November 3rd. The stock was sold at an average price of $22.76, for a total transaction of $616,796.00. Following the completion of the sale, the director now owns 181,860 shares of the company’s stock, valued at approximately $4,139,133.60. The sale was disclosed in a legal filing with the SEC, which is accessible through this hyperlink. Corporate insiders own 1.80% of the company’s stock. 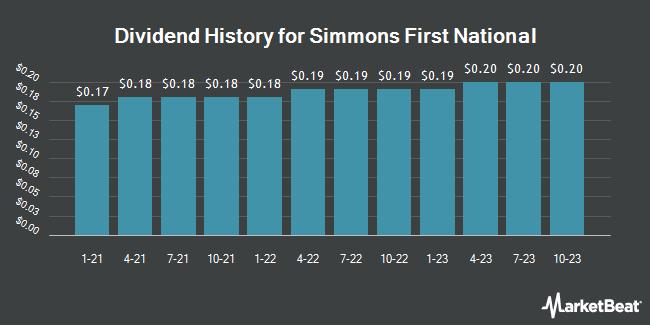 Wealthquest Corp Has $23.43 Million Position in The Procter & Gamble Company

Complete the form below to receive the latest headlines and analysts' recommendations for Simmons First National with our free daily email newsletter: