Deciphera Pharmaceuticals, Inc. (NASDAQ:DCPH – Get Rating) major shareholder Brightstar Associates Llc bought 1,666,666 shares of the firm’s stock in a transaction that occurred on Tuesday, January 24th. The shares were acquired at an average price of $18.00 per share, with a total value of $29,999,988.00. Following the purchase, the insider now owns 19,718,014 shares in the company, valued at $354,924,252. The acquisition was disclosed in a document filed with the Securities & Exchange Commission, which is available through this link. Major shareholders that own 10% or more of a company’s stock are required to disclose their transactions with the SEC.

Deciphera Pharmaceuticals, Inc, a biopharmaceutical company, develops drugs to enhance the lives of cancer patients by addressing key mechanisms of drug resistance that limit the rate and durability of response to existing cancer therapies in the United States and internationally. Its lead drug candidate is QINLOCK used for the treatment of gastrointestinal stromal tumors (GIST), as well as in INTRIGUE Phase 3 study to treat second-line GIST. 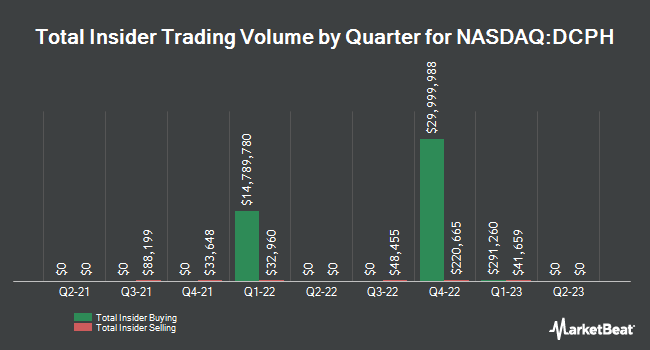 Philcoin Trading Down 1.4% Over Last Week

SmartFi Trading Down 3.1% This Week

Complete the form below to receive the latest headlines and analysts' recommendations for Deciphera Pharmaceuticals with our free daily email newsletter: