Broadcom Inc. (NASDAQ:AVGO – Get Rating) has been given an average recommendation of “Moderate Buy” by the twenty-one brokerages that are currently covering the company, MarketBeat Ratings reports. Two analysts have rated the stock with a hold rating, twelve have assigned a buy rating and one has assigned a strong buy rating to the company. The average 12 month target price among brokerages that have issued a report on the stock in the last year is $667.21.

In related news, Director Justine Page sold 170 shares of the company’s stock in a transaction on Tuesday, December 13th. The shares were sold at an average price of $574.86, for a total value of $97,726.20. Following the completion of the sale, the director now directly owns 2,981 shares in the company, valued at $1,713,657.66. The sale was disclosed in a filing with the Securities & Exchange Commission, which is available at the SEC website. 2.30% of the stock is currently owned by corporate insiders.

Institutional Investors Weigh In On Broadcom

Broadcom (NASDAQ:AVGO – Get Rating) last announced its quarterly earnings data on Thursday, December 8th. The semiconductor manufacturer reported $9.75 EPS for the quarter, beating analysts’ consensus estimates of $9.50 by $0.25. Broadcom had a return on equity of 70.00% and a net margin of 34.62%. The company had revenue of $8.93 billion during the quarter, compared to the consensus estimate of $8.90 billion. During the same quarter in the prior year, the firm earned $7.01 EPS. The company’s quarterly revenue was up 20.6% compared to the same quarter last year. As a group, equities analysts anticipate that Broadcom will post 37.39 EPS for the current fiscal year. 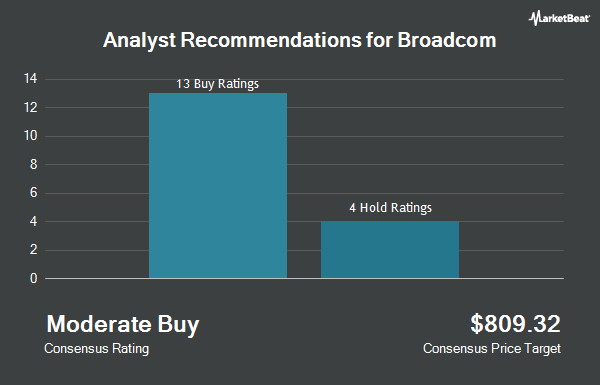 Receive News & Ratings for Broadcom Daily - Enter your email address below to receive a concise daily summary of the latest news and analysts' ratings for Broadcom and related companies with MarketBeat.com's FREE daily email newsletter.

Conflux Trading Up 14.6% This Week

GG TOKEN Trading Down 8.6% This Week

Complete the form below to receive the latest headlines and analysts' recommendations for Broadcom with our free daily email newsletter: