Bank of Hawaii (NYSE:BOH – Get Rating) issued its quarterly earnings results on Monday. The bank reported $1.50 earnings per share for the quarter, topping analysts’ consensus estimates of $1.42 by $0.08, MarketWatch Earnings reports. Bank of Hawaii had a return on equity of 18.37% and a net margin of 31.88%. During the same quarter in the prior year, the company posted $1.55 earnings per share.

Insider Activity at Bank of Hawaii

In other Bank of Hawaii news, CEO Peter S. Ho sold 5,500 shares of the company’s stock in a transaction on Thursday, November 10th. The shares were sold at an average price of $79.30, for a total transaction of $436,150.00. Following the completion of the transaction, the chief executive officer now directly owns 233,681 shares in the company, valued at $18,530,903.30. The transaction was disclosed in a document filed with the Securities & Exchange Commission, which is accessible through this hyperlink. Company insiders own 2.06% of the company’s stock.

Institutional Investors Weigh In On Bank of Hawaii

Bank of Hawaii Corp. operates as a bank holding company, which engages in the provision of financial services. It operates through the following segments: Retail Banking, Commercial Banking, Investment Services and Private Banking, and Treasury and Other. The Retail Banking segment offers financial products and services to consumers and small businesses. 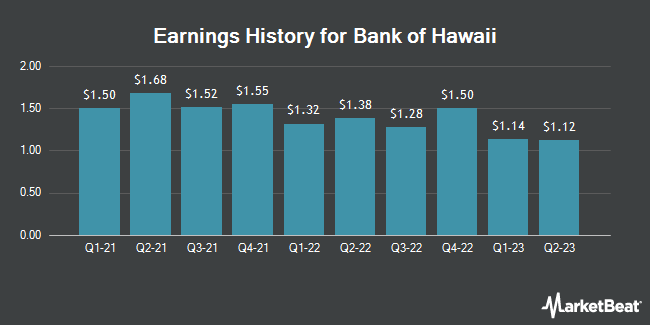 Complete the form below to receive the latest headlines and analysts' recommendations for Bank of Hawaii with our free daily email newsletter: