Ross Stores (NASDAQ:ROST – Get Rating) posted its earnings results on Thursday. The apparel retailer reported $1.00 EPS for the quarter, beating the consensus estimate of $0.81 by $0.19, RTT News reports. The firm had revenue of $4.57 billion during the quarter, compared to the consensus estimate of $4.37 billion. Ross Stores had a return on equity of 36.36% and a net margin of 7.97%. The business’s quarterly revenue was down .2% on a year-over-year basis. During the same period last year, the company earned $1.09 earnings per share. Ross Stores updated its Q4 guidance to $1.13-1.26 EPS and its FY23 guidance to $4.21-4.34 EPS.

The firm also recently declared a quarterly dividend, which will be paid on Friday, December 30th. Shareholders of record on Tuesday, December 6th will be issued a $0.31 dividend. This represents a $1.24 annualized dividend and a yield of 1.27%. Ross Stores’s payout ratio is 29.45%.

Ross Stores, Inc, together with its subsidiaries, operates off-price retail apparel and home fashion stores under the Ross Dress for Less and dd's DISCOUNTS brand names. Its stores primarily offer apparel, accessories, footwear, and home fashions. The company's Ross Dress for Less stores sell its products at department and specialty stores primarily to middle income households; and dd's DISCOUNTS stores sell its products at department and discount stores for households with moderate income. 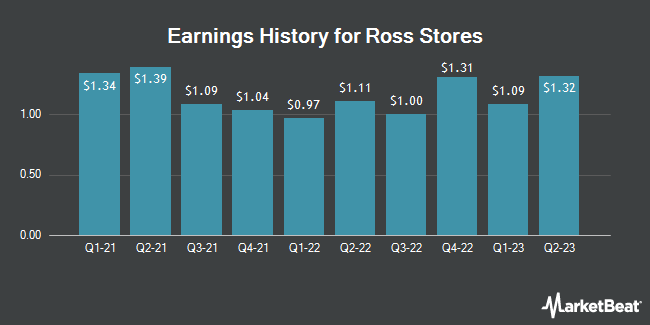 Biconomy Trading Up 9.9% This Week

Complete the form below to receive the latest headlines and analysts' recommendations for Ross Stores with our free daily email newsletter: