DigitalOcean (NASDAQ:DOCN – Get Rating) last posted its quarterly earnings data on Monday, August 8th. The company reported $0.20 earnings per share for the quarter, topping analysts’ consensus estimates of $0.10 by $0.10. DigitalOcean had a negative return on equity of 7.59% and a negative net margin of 7.78%. The business had revenue of $133.88 million for the quarter, compared to analyst estimates of $134.48 million. During the same quarter in the prior year, the company earned ($0.02) earnings per share. The company’s revenue was up 29.0% on a year-over-year basis. Research analysts predict that DigitalOcean will post -0.12 EPS for the current year.

Insider Buying and Selling at DigitalOcean

Institutional Investors Weigh In On DigitalOcean

DigitalOcean Holdings, Inc, through its subsidiaries, operates a cloud computing platform in North America, Europe, Asia, and internationally. Its platform provides on-demand infrastructure and platform tools for developers, start-ups, and small and medium size businesses. The company offers infrastructure solutions across compute, storage, and networking, as well as enables developers to extend the native capabilities of its cloud with fully managed application, container, and database offerings. 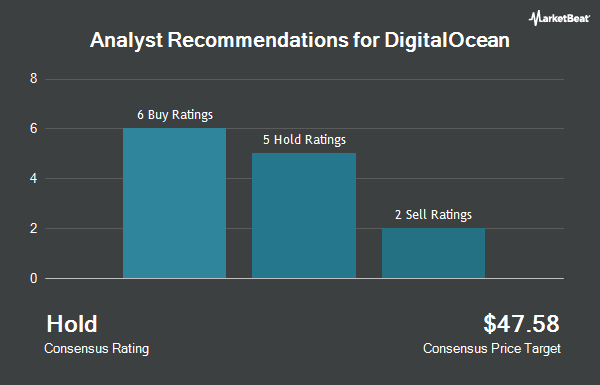 Complete the form below to receive the latest headlines and analysts' recommendations for DigitalOcean with our free daily email newsletter: