American States Water (NYSE:AWR – Get Rating) last released its quarterly earnings results on Monday, May 2nd. The utilities provider reported $0.38 EPS for the quarter, missing analysts’ consensus estimates of $0.54 by ($0.16). American States Water had a return on equity of 13.14% and a net margin of 18.20%. The company had revenue of $108.57 million during the quarter, compared to analysts’ expectations of $122.00 million. During the same period in the prior year, the firm earned $0.52 EPS. On average, research analysts anticipate that American States Water will post 2.59 earnings per share for the current fiscal year.

In other news, insider Bryan K. Switzer sold 2,645 shares of the business’s stock in a transaction that occurred on Wednesday, May 25th. The shares were sold at an average price of $79.93, for a total value of $211,414.85. Following the completion of the sale, the insider now directly owns 6,630 shares in the company, valued at approximately $529,935.90. The sale was disclosed in a document filed with the SEC, which is available at this hyperlink. Company insiders own 0.92% of the company’s stock.

A number of brokerages have recently weighed in on AWR. StockNews.com began coverage on shares of American States Water in a report on Thursday, March 31st. They issued a “hold” rating for the company. Barclays lowered their price objective on shares of American States Water from $88.00 to $80.00 and set an “underweight” rating for the company in a report on Monday, July 18th.

American States Water Company, through its subsidiaries, provides water and electric services to residential, commercial, industrial, and other customers in the United States. It operates through three segments: Water, Electric, and Contracted Services. The company purchases, produces, distributes, and sells water, as well as distributes electricity. 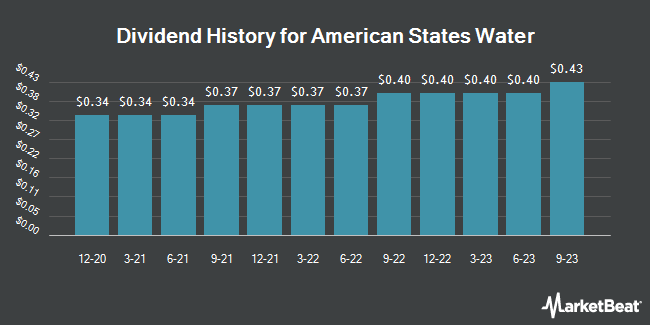 Complete the form below to receive the latest headlines and analysts' recommendations for American States Water with our free daily email newsletter: