Fifth Third Bancorp (NASDAQ:FITB – Get Rating) had its target price reduced by Wells Fargo & Company from $52.00 to $43.00 in a research note issued to investors on Friday, MarketBeat Ratings reports. Wells Fargo & Company currently has an overweight rating on the financial services provider’s stock.

Fifth Third Bancorp (NASDAQ:FITB – Get Rating) last issued its quarterly earnings data on Tuesday, April 19th. The financial services provider reported $0.69 EPS for the quarter, missing analysts’ consensus estimates of $0.70 by ($0.01). The company had revenue of $1.88 billion for the quarter, compared to analyst estimates of $1.94 billion. Fifth Third Bancorp had a return on equity of 12.99% and a net margin of 31.14%. During the same quarter in the prior year, the firm earned $0.93 EPS. On average, research analysts anticipate that Fifth Third Bancorp will post 3.68 earnings per share for the current year.

The company also recently disclosed a quarterly dividend, which will be paid on Friday, July 15th. Investors of record on Thursday, June 30th will be issued a $0.30 dividend. This represents a $1.20 annualized dividend and a yield of 3.55%. The ex-dividend date of this dividend is Wednesday, June 29th. Fifth Third Bancorp’s dividend payout ratio is currently 34.38%.

About Fifth Third Bancorp (Get Rating) 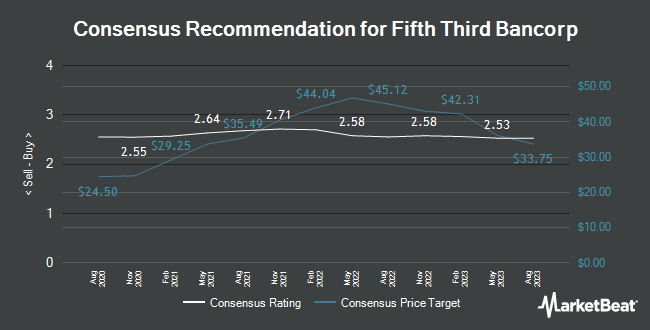 Ritocoin Tops One Day Volume of $6.00

Bitball Treasure Price Up 0% This Week

Complete the form below to receive the latest headlines and analysts' recommendations for Fifth Third Bancorp with our free daily email newsletter: