K.J. Harrison & Partners Inc reduced its stake in shares of Impinj, Inc. (NASDAQ:PI – Get Rating) by 25.9% during the 1st quarter, according to its most recent filing with the SEC. The firm owned 28,550 shares of the company’s stock after selling 10,000 shares during the period. K.J. Harrison & Partners Inc owned approximately 0.12% of Impinj worth $1,814,000 at the end of the most recent quarter.

Impinj (NASDAQ:PI – Get Rating) last announced its quarterly earnings results on Wednesday, April 27th. The company reported ($0.36) earnings per share (EPS) for the quarter, topping analysts’ consensus estimates of ($0.49) by $0.13. Impinj had a negative net margin of 26.39% and a negative return on equity of 89.38%. The business had revenue of $53.14 million during the quarter, compared to the consensus estimate of $51.13 million. During the same quarter last year, the firm earned ($0.30) EPS. On average, research analysts predict that Impinj, Inc. will post -1.48 earnings per share for the current year.

About Impinj (Get Rating)

Impinj, Inc operates a cloud connectivity platform in the Americas, the Asia Pacific, Europe, the Middle East, and Africa. Its platform, which comprises multiple product families, wirelessly connects individual items and delivers data about the connected items to business and consumer applications. The company's platform comprises endpoint ICs, a miniature radios-on-a-chip that attaches to a host item and includes a number to identify the item. 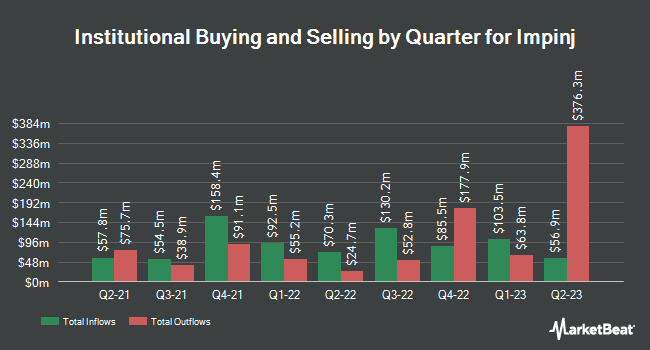 Receive News & Ratings for Impinj Daily - Enter your email address below to receive a concise daily summary of the latest news and analysts' ratings for Impinj and related companies with MarketBeat.com's FREE daily email newsletter.

Complete the form below to receive the latest headlines and analysts' recommendations for Impinj with our free daily email newsletter: