Vascular Biogenics (NASDAQ:VBLT – Get Rating) issued its quarterly earnings data on Tuesday. The biopharmaceutical company reported ($0.13) earnings per share (EPS) for the quarter, missing the consensus estimate of ($0.11) by ($0.02), Fidelity Earnings reports. Vascular Biogenics had a negative return on equity of 63.08% and a negative net margin of 3,895.83%. During the same period last year, the company earned ($0.12) EPS.

About Vascular Biogenics (Get Rating)

Vascular Biogenics Ltd., a clinical stage biopharmaceutical company, develops therapeutics for the treatment of cancer and immune-inflammatory diseases in Israel and the United States. Its programs are based on its vascular targeting system, a gene-based technology targeting newly formed blood vessels; and monocyte targeting technology, an antibody-based technology that enables specifically inhibit monocyte migration for immune-inflammatory applications. 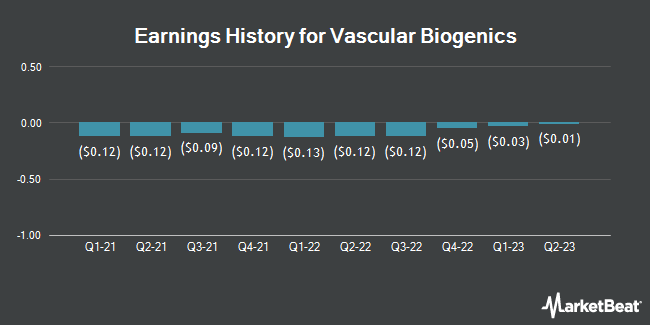 EventChain Trading Up 15.4% This Week

Complete the form below to receive the latest headlines and analysts' recommendations for Vascular Biogenics with our free daily email newsletter: