Dolby Laboratories (NYSE:DLB – Get Rating) updated its FY 2022 earnings guidance on Monday. The company provided earnings per share (EPS) guidance of $3.27-$3.77 for the period, compared to the consensus estimate of $3.80. The company issued revenue guidance of $1.30 billion-$1.35 billion, compared to the consensus revenue estimate of $1.37 billion.Dolby Laboratories also updated its Q3 2022 guidance to $0.54-$0.69 EPS.

Dolby Laboratories (NYSE:DLB – Get Rating) last released its quarterly earnings data on Thursday, May 5th. The electronics maker reported $0.70 earnings per share for the quarter, topping analysts’ consensus estimates of $0.60 by $0.10. The firm had revenue of $334.37 million during the quarter, compared to analyst estimates of $332.51 million. Dolby Laboratories had a return on equity of 9.72% and a net margin of 17.14%. The business’s quarterly revenue was up 4.6% compared to the same quarter last year. During the same quarter in the prior year, the company posted $0.73 earnings per share. As a group, equities research analysts anticipate that Dolby Laboratories will post 2.46 EPS for the current fiscal year.

The firm also recently disclosed a quarterly dividend, which will be paid on Wednesday, May 25th. Stockholders of record on Tuesday, May 17th will be paid a $0.25 dividend. This represents a $1.00 dividend on an annualized basis and a dividend yield of 1.32%. The ex-dividend date is Monday, May 16th. Dolby Laboratories’s dividend payout ratio (DPR) is 48.31%.

In related news, SVP John D. Couling sold 500 shares of the business’s stock in a transaction dated Wednesday, May 11th. The stock was sold at an average price of $72.61, for a total value of $36,305.00. Following the sale, the senior vice president now directly owns 80,172 shares in the company, valued at $5,821,288.92. The transaction was disclosed in a document filed with the Securities & Exchange Commission, which is available through this link. 37.06% of the stock is currently owned by insiders.

Dolby Laboratories, Inc creates audio and imaging technologies that transform entertainment and communications at the cinema, DTV, transmissions and devices, mobile devices, OTT video and music services, and home entertainment devices. The company develops and licenses its audio technologies, such as AAC & HE-AAC, a digital audio codec solution used for a range of media applications.; AVC, a digital video codec with high bandwidth efficiency used in various media devices; Dolby AC-4, an digital audio coding technology that delivers new audio experiences to a range of playback devices; and Dolby Atmos technology for cinema and a range of media devices. 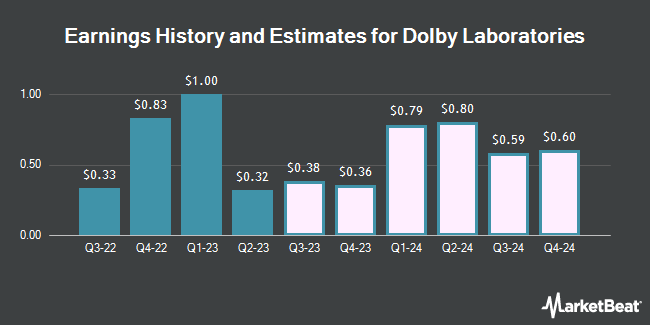 Yocoin Price Down 27% This Week

Complete the form below to receive the latest headlines and analysts' recommendations for Dolby Laboratories with our free daily email newsletter: