TheStreet downgraded shares of MasTec (NYSE:MTZ – Get Rating) from a b- rating to a c rating in a report released on Monday morning, TheStreetRatingsTable reports.

MasTec (NYSE:MTZ – Get Rating) last announced its quarterly earnings results on Thursday, May 5th. The construction company reported ($0.03) EPS for the quarter, beating analysts’ consensus estimates of ($0.20) by $0.17. MasTec had a net margin of 2.81% and a return on equity of 12.91%. The firm had revenue of $1.95 billion during the quarter, compared to the consensus estimate of $1.79 billion. During the same quarter last year, the firm earned $1.04 EPS. The firm’s revenue for the quarter was up 10.1% compared to the same quarter last year. As a group, sell-side analysts expect that MasTec will post 4.04 earnings per share for the current year.

About MasTec (Get Rating)

MasTec, Inc, an infrastructure construction company, provides engineering, building, installation, maintenance, and upgrade services for communications, energy, utility, and other infrastructure primarily in the United States and Canada. It operates through Communications, Clean Energy and Infrastructure, Oil and Gas, Power Delivery, and Other segments. 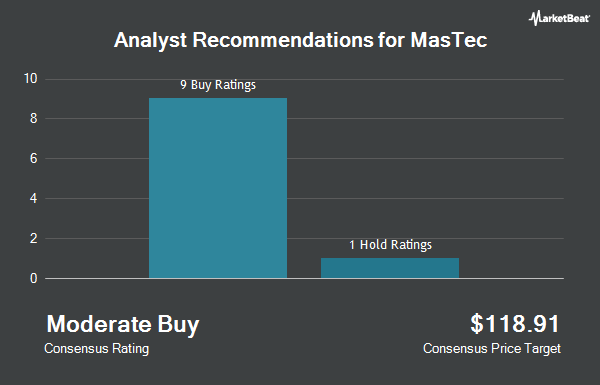 Receive News & Ratings for MasTec Daily - Enter your email address below to receive a concise daily summary of the latest news and analysts' ratings for MasTec and related companies with MarketBeat.com's FREE daily email newsletter.

Complete the form below to receive the latest headlines and analysts' recommendations for MasTec with our free daily email newsletter: