Several equities research analysts recently issued reports on SKYW shares. Raymond James downgraded SkyWest from an “outperform” rating to a “market perform” rating in a research note on Wednesday, April 27th. Deutsche Bank Aktiengesellschaft decreased their price target on SkyWest from $39.00 to $30.00 in a research note on Friday, April 29th. StockNews.com began coverage on SkyWest in a report on Thursday, March 31st. They issued a “hold” rating for the company. The Goldman Sachs Group decreased their target price on shares of SkyWest from $62.00 to $54.00 and set a “buy” rating for the company in a research note on Thursday, April 7th. Finally, Zacks Investment Research raised shares of SkyWest from a “sell” rating to a “hold” rating and set a $27.00 price objective on the stock in a research report on Tuesday, March 15th. Five investment analysts have rated the stock with a hold rating and one has issued a buy rating to the company’s stock. According to data from MarketBeat.com, the stock has an average rating of “Hold” and an average target price of $38.60.

SkyWest (NASDAQ:SKYW – Get Rating) last posted its earnings results on Thursday, April 28th. The transportation company reported $0.35 earnings per share (EPS) for the quarter, beating the consensus estimate of ($0.01) by $0.36. The firm had revenue of $735.15 million during the quarter, compared to analysts’ expectations of $699.63 million. SkyWest had a net margin of 3.22% and a return on equity of 6.95%. The business’s revenue was up 37.5% compared to the same quarter last year. During the same period in the previous year, the business posted $0.71 EPS. On average, sell-side analysts predict that SkyWest, Inc. will post 0.85 earnings per share for the current year.

In other SkyWest news, Director Jerry C. Atkin acquired 55,000 shares of the business’s stock in a transaction on Friday, March 11th. The stock was purchased at an average price of $25.33 per share, for a total transaction of $1,393,150.00. The transaction was disclosed in a legal filing with the SEC, which is accessible through this hyperlink. Corporate insiders own 2.00% of the company’s stock.

Want to see what other hedge funds are holding SKYW? Visit HoldingsChannel.com to get the latest 13F filings and insider trades for SkyWest, Inc. (NASDAQ:SKYW – Get Rating). 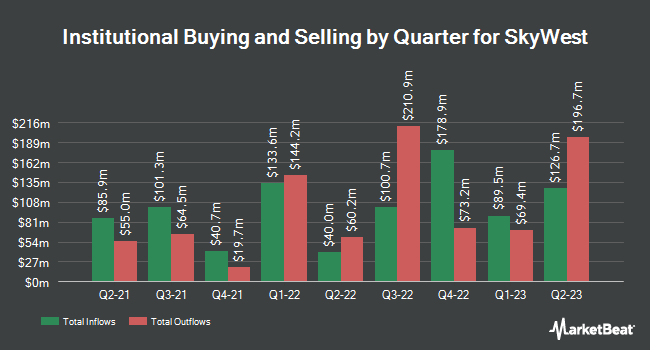 Receive News & Ratings for SkyWest Daily - Enter your email address below to receive a concise daily summary of the latest news and analysts' ratings for SkyWest and related companies with MarketBeat.com's FREE daily email newsletter.

MFS Government Markets Income Trust Short Interest Up 147.3% in May

$240.23 Million in Sales Expected for Addus HomeCare Co. This Quarter

Complete the form below to receive the latest headlines and analysts' recommendations for SkyWest with our free daily email newsletter: