In other Sensei Biotherapeutics news, Director James Peyer purchased 15,000 shares of the stock in a transaction on Thursday, February 24th. The stock was acquired at an average price of $3.63 per share, with a total value of $54,450.00. The acquisition was disclosed in a document filed with the Securities & Exchange Commission, which is accessible through this link. Also, major shareholder Cambrian Biopharma Inc bought 10,000 shares of the firm’s stock in a transaction that occurred on Monday, February 14th. The shares were purchased at an average cost of $4.18 per share, with a total value of $41,800.00. The disclosure for this purchase can be found here. In the last quarter, insiders acquired 66,203 shares of company stock worth $264,629.

Separately, Piper Sandler lowered their target price on shares of Sensei Biotherapeutics from $12.00 to $10.00 and set an “overweight” rating on the stock in a research note on Thursday, March 10th. Three research analysts have rated the stock with a hold rating and four have issued a buy rating to the company. According to data from MarketBeat, Sensei Biotherapeutics has a consensus rating of “Buy” and a consensus price target of $12.25.

Sensei Biotherapeutics, Inc, a biopharmaceutical company, engages in the discovery and development of immunotherapies with an initial focus on treatments for cancer. It develops proprietary ImmunoPhage platform, an immunotherapy approach that is designed to utilize bacteriophage to induce a focused and coordinated innate and adaptive immune response; and Tumor Microenvironment Activated Biologics, a platform designed to unleash the anti-tumor potential of T-cells, as well as human monoclonal antibodies that are selectively active in the tumor microenvironment and target immune checkpoints or other critical immune pathways. 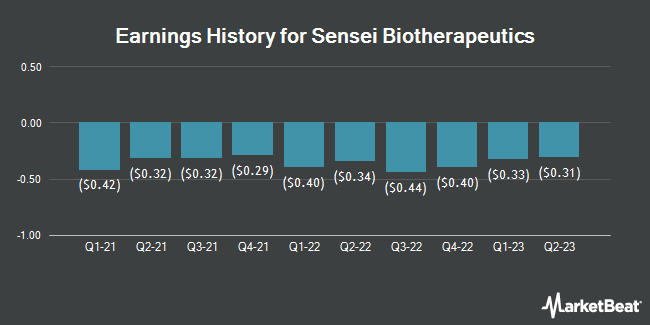 Complete the form below to receive the latest headlines and analysts' recommendations for Sensei Biotherapeutics with our free daily email newsletter: