On average, analysts expect that Standex International will report full year sales of $733.33 million for the current year, with estimates ranging from $733.00 million to $733.65 million. For the next financial year, analysts expect that the business will post sales of $783.04 million, with estimates ranging from $775.29 million to $790.80 million. Zacks’ sales calculations are a mean average based on a survey of sell-side analysts that cover Standex International.

Standex International (NYSE:SXI – Get Rating) last released its quarterly earnings results on Thursday, May 5th. The industrial products company reported $1.54 earnings per share for the quarter, topping analysts’ consensus estimates of $1.48 by $0.06. The business had revenue of $189.28 million during the quarter, compared to analysts’ expectations of $185.92 million. Standex International had a return on equity of 13.55% and a net margin of 8.54%. The company’s revenue was up 9.9% compared to the same quarter last year. During the same period in the prior year, the business posted $1.19 EPS.

Standex International announced that its board has approved a share buyback program on Thursday, May 5th that permits the company to buyback $100.00 million in outstanding shares. This buyback authorization permits the industrial products company to purchase up to 8.7% of its stock through open market purchases. Stock buyback programs are usually an indication that the company’s board believes its shares are undervalued.

About Standex International (Get Rating)

Standex International Corporation, together with subsidiaries, manufactures and sells various products and services for commercial and industrial markets in the United States and internationally. The company operates through five segments: Electronics, Engraving, Scientific, Engineering Technologies, and Specialty Solutions. 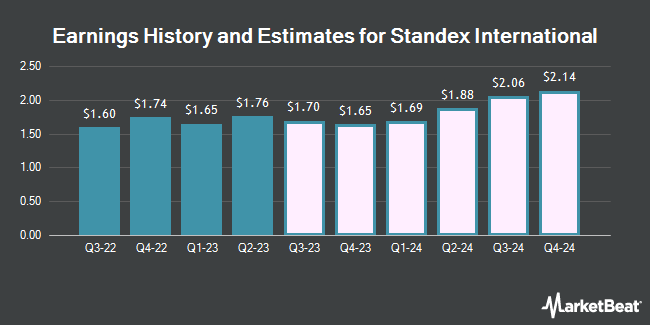 Financial Analysis: MariMed and Its Competitors

CryptoBlades Price Up 6% This Week

Complete the form below to receive the latest headlines and analysts' recommendations for Standex International with our free daily email newsletter: