Wall Street analysts expect Navitas Semiconductor Co. (NASDAQ:NVTS – Get Rating) to report earnings per share of ($0.08) for the current quarter, Zacks Investment Research reports. Two analysts have made estimates for Navitas Semiconductor’s earnings. The business is scheduled to issue its next earnings results after the market closes on Monday, January 1st.

On average, analysts expect that Navitas Semiconductor will report full year earnings of ($0.30) per share for the current year. For the next financial year, analysts anticipate that the business will report earnings of ($0.15) per share, with EPS estimates ranging from ($0.17) to ($0.11). Zacks’ EPS averages are a mean average based on a survey of research firms that cover Navitas Semiconductor.

Navitas Semiconductor (NASDAQ:NVTS – Get Rating) last announced its earnings results on Tuesday, February 15th. The company reported ($0.34) earnings per share for the quarter, missing analysts’ consensus estimates of ($0.07) by ($0.27). The firm had revenue of $7.34 million during the quarter, compared to the consensus estimate of $7.40 million.

Navitas Semiconductor Corporation designs, develops, and sells gallium nitride (GaN) power integrated circuits in China, the United States, Taiwan, Korea, and internationally. The company was incorporated in 2013 and is based in Dublin, Ireland. 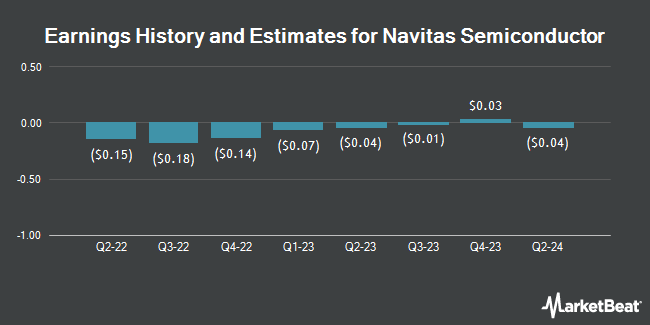 Complete the form below to receive the latest headlines and analysts' recommendations for Navitas Semiconductor with our free daily email newsletter: