We Are One Seven LLC raised its position in shares of Viper Energy Partners LP (NASDAQ:VNOM – Get Rating) by 18.6% in the 4th quarter, according to its most recent Form 13F filing with the Securities and Exchange Commission. The firm owned 29,713 shares of the oil and gas producer’s stock after buying an additional 4,654 shares during the quarter. We Are One Seven LLC’s holdings in Viper Energy Partners were worth $633,000 at the end of the most recent quarter.

The company also recently declared a quarterly dividend, which will be paid on Thursday, May 19th. Shareholders of record on Thursday, May 12th will be paid a dividend of $0.67 per share. This is an increase from Viper Energy Partners’s previous quarterly dividend of $0.47. This represents a $2.68 dividend on an annualized basis and a dividend yield of 8.54%. The ex-dividend date of this dividend is Wednesday, May 11th. Viper Energy Partners’s payout ratio is currently 179.05%.

Viper Energy Partners LP owns, acquires, and exploits oil and natural gas properties in North America. As of December 31, 2021, it had mineral interests in 27,027 net royalty acres in the Permian Basin and Eagle Ford Shale; and estimated proved oil and natural gas reserves of 127,888 thousand barrels of crude oil equivalent.

Want to see what other hedge funds are holding VNOM? Visit HoldingsChannel.com to get the latest 13F filings and insider trades for Viper Energy Partners LP (NASDAQ:VNOM – Get Rating). 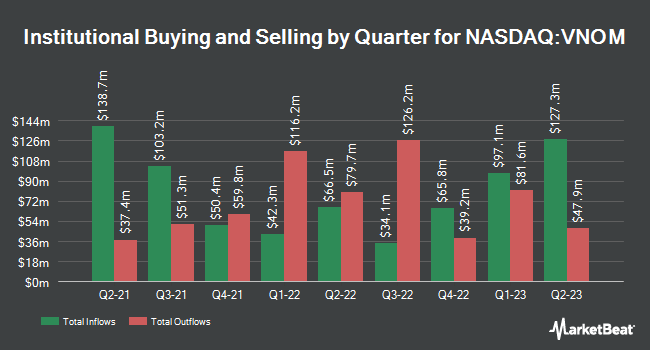 Vista Energy Shares Gap Down to $7.48

Complete the form below to receive the latest headlines and analysts' recommendations for Viper Energy Partners with our free daily email newsletter: