Shares of The Swatch Group AG (OTCMKTS:SWGAY – Get Rating) have been given a consensus recommendation of “Hold” by the nine brokerages that are covering the firm, MarketBeat Ratings reports. Three analysts have rated the stock with a sell recommendation, two have given a hold recommendation and three have assigned a buy recommendation to the company. The average twelve-month target price among analysts that have issued a report on the stock in the last year is $325.00.

The Swatch Group AG designs, manufactures, and sells finished watches, jewelry, and watch movements and components worldwide. It operates through Watches & Jewelry and Electronic Systems segments. The Watches & Jewelry segment designs, produces, and commercializes watches and jewelry. The Electronic Systems segment is involved in the design, production, and commercialization of electronic components, as well as sports timing activities. 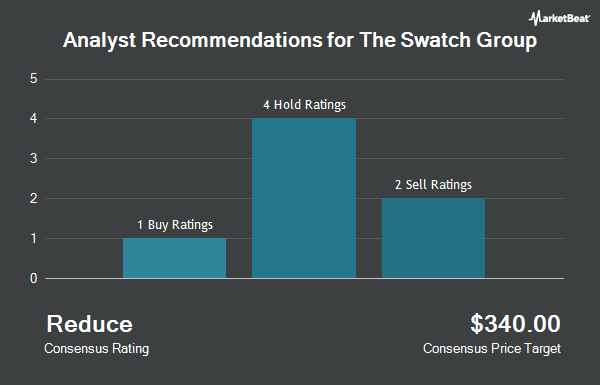 Complete the form below to receive the latest headlines and analysts' recommendations for The Swatch Group with our free daily email newsletter: