Thompson Siegel & Walmsley LLC trimmed its position in shares of Johnson Controls International plc (NYSE:JCI – Get Rating) by 85.7% in the fourth quarter, according to the company in its most recent 13F filing with the Securities and Exchange Commission. The institutional investor owned 2,500 shares of the company’s stock after selling 15,000 shares during the period. Thompson Siegel & Walmsley LLC’s holdings in Johnson Controls International were worth $203,000 at the end of the most recent reporting period.

The firm also recently declared a quarterly dividend, which was paid on Thursday, April 14th. Stockholders of record on Monday, March 21st were issued a dividend of $0.35 per share. This represents a $1.40 dividend on an annualized basis and a dividend yield of 2.48%. This is a positive change from Johnson Controls International’s previous quarterly dividend of $0.34. The ex-dividend date was Friday, March 18th. Johnson Controls International’s dividend payout ratio (DPR) is 63.64%.

In other news, VP Robert M. Vanhimbergen sold 5,683 shares of the firm’s stock in a transaction on Friday, February 25th. The stock was sold at an average price of $64.44, for a total transaction of $366,212.52. The sale was disclosed in a document filed with the SEC, which can be accessed through the SEC website. 0.76% of the stock is currently owned by company insiders.

Want to see what other hedge funds are holding JCI? Visit HoldingsChannel.com to get the latest 13F filings and insider trades for Johnson Controls International plc (NYSE:JCI – Get Rating). 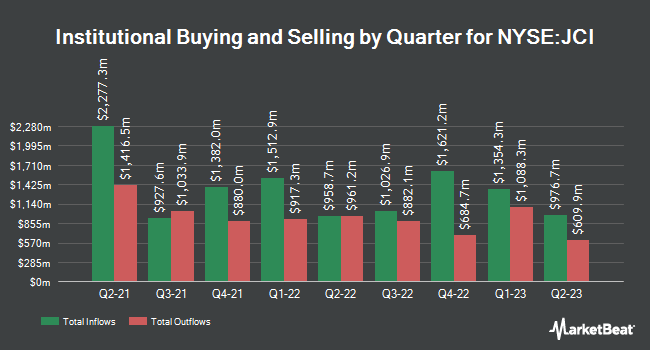 Complete the form below to receive the latest headlines and analysts' recommendations for Johnson Controls International with our free daily email newsletter: