Fresh Del Monte Produce (NYSE:FDP – Get Rating) released its earnings results on Wednesday. The company reported $0.55 earnings per share (EPS) for the quarter, topping the consensus estimate of $0.46 by $0.09, MarketWatch Earnings reports. The company had revenue of $1.14 billion during the quarter, compared to analyst estimates of $1.12 billion. Fresh Del Monte Produce had a net margin of 1.88% and a return on equity of 4.41%. The firm’s quarterly revenue was up 4.5% compared to the same quarter last year. During the same period in the prior year, the firm posted $0.88 EPS.

The firm also recently announced a quarterly dividend, which will be paid on Friday, June 10th. Stockholders of record on Wednesday, May 18th will be given a dividend of $0.15 per share. This represents a $0.60 annualized dividend and a dividend yield of 2.52%. The ex-dividend date of this dividend is Tuesday, May 17th. Fresh Del Monte Produce’s dividend payout ratio is 35.71%.

Separately, StockNews.com assumed coverage on shares of Fresh Del Monte Produce in a research report on Thursday, March 31st. They set a “hold” rating for the company.

Fresh Del Monte Produce Inc, through its subsidiaries, produces, markets, and distributes fresh and fresh-cut fruits and vegetables in North America, Europe, the Middle East, Africa, Asia, and internationally. It operates through three segments: Fresh and Value-Added Products, Banana, and Other Products and Services. 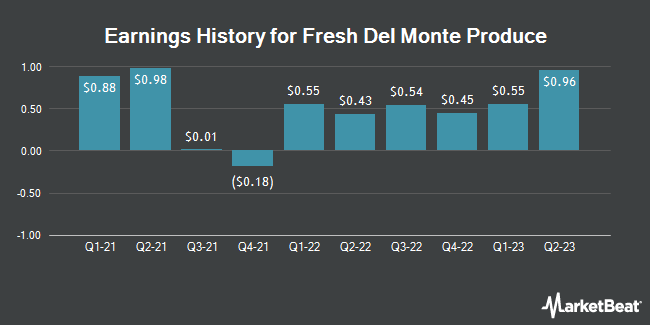 Vista Energy Shares Gap Down to $7.48

Complete the form below to receive the latest headlines and analysts' recommendations for Fresh Del Monte Produce with our free daily email newsletter: