On average, analysts expect that Casella Waste Systems will report full-year earnings of $1.00 per share for the current year, with EPS estimates ranging from $0.99 to $1.00. For the next financial year, analysts anticipate that the firm will post earnings of $1.22 per share, with EPS estimates ranging from $1.14 to $1.26. Zacks’ earnings per share calculations are a mean average based on a survey of research analysts that follow Casella Waste Systems.

Casella Waste Systems (NASDAQ:CWST – Get Rating) last released its earnings results on Thursday, April 28th. The industrial products company reported $0.11 earnings per share for the quarter, hitting the Zacks’ consensus estimate of $0.11. The firm had revenue of $234.00 million for the quarter, compared to the consensus estimate of $221.77 million. Casella Waste Systems had a net margin of 4.62% and a return on equity of 11.62%. The company’s revenue was up 23.5% compared to the same quarter last year. During the same period in the prior year, the firm earned $0.09 EPS.

Casella Waste Systems, Inc, together with its subsidiaries, operates as a vertically integrated solid waste services company in the northeastern United States. It offers resource management services primarily in the areas of solid waste collection and disposal, transfer, recycling, and organics services to residential, commercial, municipal, institutional, and industrial customers. 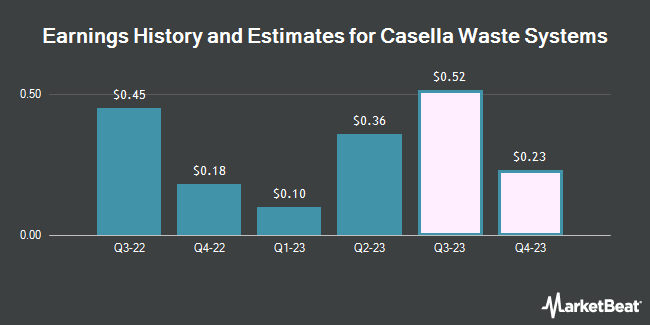 -$0.04 Earnings Per Share Expected for Clearside Biomedical, Inc. This Quarter

Complete the form below to receive the latest headlines and analysts' recommendations for Casella Waste Systems with our free daily email newsletter: