Shares of DHT Holdings, Inc. (NYSE:DHT – Get Rating) have been assigned an average rating of “Hold” from the eight brokerages that are presently covering the company, MarketBeat.com reports. Two equities research analysts have rated the stock with a sell recommendation and five have given a buy recommendation to the company. The average 12-month price objective among analysts that have covered the stock in the last year is $7.83.

DHT (NYSE:DHT – Get Rating) last posted its quarterly earnings data on Monday, February 7th. The shipping company reported ($0.05) EPS for the quarter, beating the Thomson Reuters’ consensus estimate of ($0.09) by $0.04. The firm had revenue of $49.30 million during the quarter, compared to analyst estimates of $45.83 million. DHT had a negative net margin of 3.89% and a negative return on equity of 3.66%. The company’s revenue for the quarter was down 36.6% on a year-over-year basis. During the same quarter last year, the business posted $0.08 EPS. As a group, equities analysts anticipate that DHT will post 0.13 EPS for the current fiscal year.

About DHT (Get Rating)

DHT Holdings, Inc, through its subsidiaries, owns and operates crude oil tankers primarily in Monaco, Singapore, and Norway. As of March 17, 2022, it had a fleet of 26 very large crude carriers with a capacity of 8,043,657 deadweight tons. The company was incorporated in 2005 and is headquartered in Hamilton, Bermuda. 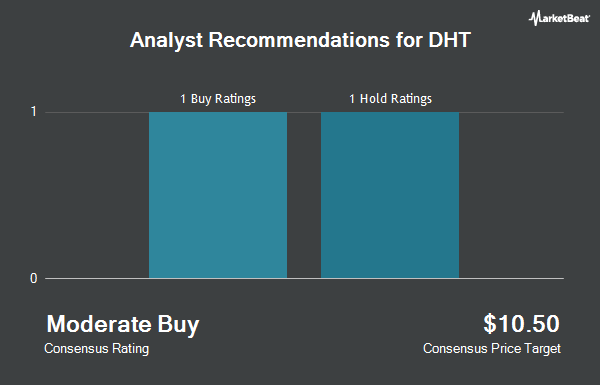 Receive News & Ratings for DHT Daily - Enter your email address below to receive a concise daily summary of the latest news and analysts' ratings for DHT and related companies with MarketBeat.com's FREE daily email newsletter.

Complete the form below to receive the latest headlines and analysts' recommendations for DHT with our free daily email newsletter: