The company also recently announced a quarterly dividend, which was paid on Thursday, April 7th. Stockholders of record on Thursday, March 17th were issued a $0.13 dividend. This is an increase from SITE Centers’s previous quarterly dividend of $0.12. This represents a $0.52 annualized dividend and a dividend yield of 3.10%. The ex-dividend date was Wednesday, March 16th. SITE Centers’s payout ratio is presently 106.12%.

Several research firms recently commented on SITC. Wells Fargo & Company boosted their target price on SITE Centers from $16.50 to $18.50 and gave the stock an “overweight” rating in a research note on Thursday, April 7th. Morgan Stanley decreased their price target on SITE Centers from $17.00 to $16.50 and set an “equal weight” rating for the company in a report on Thursday, March 3rd. Finally, StockNews.com began coverage on SITE Centers in a report on Thursday, March 31st. They set a “hold” rating for the company. Two equities research analysts have rated the stock with a hold rating and four have given a buy rating to the stock. According to data from MarketBeat.com, the company has a consensus rating of “Buy” and an average target price of $18.20.

About SITE Centers (Get Rating)

SITE Centers is an owner and manager of open-air shopping centers that provide a highly-compelling shopping experience and merchandise mix for retail partners and consumers. The Company is a self-administered and self-managed REIT operating as a fully integrated real estate company, and is publicly traded on the New York Stock Exchange under the ticker symbol SITC. 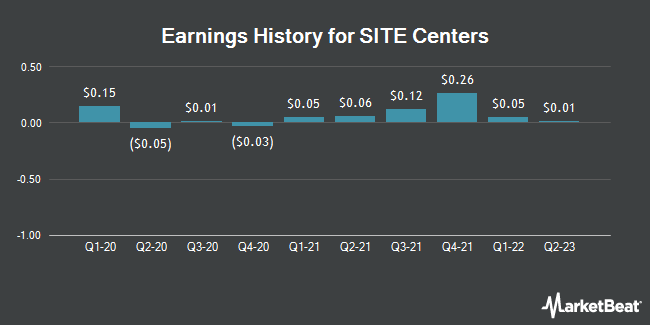 $698.73 Million in Sales Expected for SkyWest, Inc. This Quarter

$0.56 Earnings Per Share Expected for Paramount Global This Quarter

$193.92 Million in Sales Expected for Natera, Inc. This Quarter

Complete the form below to receive the latest headlines and analysts' recommendations for SITE Centers with our free daily email newsletter: